By selecting "Accept", you allow HexTransforma Healthcare Ltd to use cookies, pixels, tags and similar technologies. We can use these technologies to collect your device and browser information in order to track your activity for Marketing and Functional purposes, like featuring personalised ads and improving the website. HexTransforma Healthcare Ltd may share this data with third-parties - including social media advertising partners like Google, Facebook and Instagram - for Marketing purposes. Please view our Privacy Statement (see "Cookies" section) for more information and to understand how we use your data for Required purposes such as registering to our website.

Please choose whether this site may use Functional and/or Advertising cookies, as described below:

These cookies are required to enable core site functionality

We recently spoke to Khalid Keshta – body builder, sports nutritionist, founder, and Type 1 Diabetic – about his experience of living with Type 1 Diabetes, and how medical technology helps him live his life to the fullest. Read below for the full Q&A.

Tell us a bit about yourself

My name is Khalid Keshta, I live in the UK in Milton Keynes. Originally I'm a civil engineer. I'm a personal trainer, sports nutritionist, and a diabetes and weight control specialist. I'm also a bodybuilder; I compete in several competitions in the UK and abroad representing diabetes and the diabetic community. I serve as an ambassador for a lot of diabetes-related companies and I’m also sponsored by them. I own and run the diabetes platform Diabetes Academy, which works on mentoring and guiding people with diabetes and others that are interested in diabetes.

What led to your diagnosis?

I got diagnosed when I was 18 in October 2011. I was showing all the typical symptoms that anyone with Type 1 Diabetes would have, such as losing weight, extreme thirst, dehydration, lack of concentration, short-temper – all the hyperglycaemia symptoms but on a severe level. When I got diagnosed, my blood sugar was 47 mmol/L; the normal range is 4-8 mmol/L.

I started showing these symptoms – we didn't know what it was – and at one point my mum, who is a doctor, bought a blood glucose monitor and she said, ‘let's check your blood sugar levels’. Every time we checked, it said ‘error’ and it never gave a value. Then when my siblings or my mum checked, it gave them the normal value. She took me to the hospital, they checked, found it at 47 mmol/L – and that was it. They put me on insulin drips, I went into a coma, woke up, and funnily enough I felt good. I felt revived when I woke up because my blood sugar started dropping back to normal and they explained that I have Type 1 Diabetes.

For me, I felt it was a blessing to know what was wrong with my body, because I used to train, I used to eat, and still I used to lose weight, and I didn't feel good. Anyone that has diabetes and suffers from hyperglycaemia will understand what I mean.

When did you start using medical technology to help with your condition?

When I got diagnosed, I was put on insulin pens. The flash monitors and CGMs (Continuous Glucose Monitoring) weren't very well known back then, such as the FreeStyle Libre and Dexcom.

I think about four years later, I got introduced to the FreeStyle Libre and I couldn't get funded by the NHS; there were specific restrictions and I decided I had to fund it myself. I saw the difference it would make, how easy my life would be using such technology, providing that I used to train a lot, used to spend a lot of time in the gym, used to be a football player. Testing my blood sugar was vital before, during and after training. So getting the blood glucose monitor out, unpacking it, going to wash my hands – it didn't work. It would, obviously, back then. But now with the ease I have, I would say that's so tough to do. I used to test my blood sugar about 15-20 times a day, so I literally had no place left on my fingers to prick.

Then I jumped onto an insulin pump. I think I used it for a year and a half and then I came to the conclusion that it wasn’t working very well due to my activity, because I do a lot of high intensity exercises. And for me to do that, I had to take it off. Some exercises cause hyperglycaemia; they elevate your blood sugar instead of reducing it. So I ended up using the pen and the pump at the same time. Then I started giving up on the pump and went back to MDI (Multiple Daily Injections). I was completely fine – I'm happy with them.

Then, finally, I came in contact with Insulet – they are an insulin pump supplier. The benefit of the pump is that it's wireless; you just attach it, put it on your core, or put it anywhere, and change it every few days. This made a big difference in that – I don't mind needles at all –sometimes I wake up hyperglycaemic. I used to suffer from something called ‘dawn phenomenon’ – a lot of people suffer from it. The only way to tackle that is by having a pump, because with the pump you can adjust the insulin dosage. So I used to increase it just before I woke up and it took care of it. Diabetes technology has helped a lot in my current situation.

What medical technology do you use today and how does that help you?

Currently I am on the FreeStyle Libre, but I am moving to the Dexcom because I have a deal with the company – they're going to sponsor me. Right now I'm using OmniPod, which is the product from Insulet and that's it. Right now, because my competitions are so soon, my body fat is very low, so sometimes I struggle wearing the pump and I'm just on MDI. The joy of an insulin pump is that it does not have to be in a specific area, and because I have no fat on my core right now I have to put it on my side glutes. Before, I used to put it on my underarm, but again, there is no way I can put it there now.

How does medical technology help you to achieve your goals?

It's the flexibility that I have, and the ease as well. If I am on insulin pens and if I don't have any CGMs that I'm wearing, I have to always carry a bag with the blood glucose monitor, the lancet, the pen that pricks your finger – I have to have it everywhere.

Even the inconvenience of, ‘OK, I want to check my blood sugar now’, ‘I don't want to prick my finger’, ‘actually I'm going to do it in a bit’ – I never feel that anymore with having a test on my phone. Whether it’s the Libre or the Dexcom, I just need to look at my phone, or even my Apple Watch, for this. So it makes life a lot easier.

Did it help in where I am right now? Of course. But does that mean that it's essential or 100% necessary? No. I did it before all this technology arrived. So I'm saying this just for people that don't have them not to think that that’s an excuse not to work throughout their life or work on achieving what they want. It's possible, but this makes it easier.

How difficult do you think life would be for you without the medical technology you have today?

It would be harder for sure. 100% it would be a lot harder, but then if the technology wasn't even there, I would never have thought that life would be easier. Back in the day, people never had the pen – they had the syringe. They would have never thought actually, ‘oh, there's an insulin pen with a needle this short that you can use’. But definitely it made my life a lot easier. If I'm in the gym working out, I can check my blood sugar while I’m doing cardio; my phone is in front of me while I’m on the treadmill, take it, boom, done. Look at my watch while I’m training. It definitely made a big difference.

How has the pandemic affected the way you seek and receive medical treatment and appointments? Are telehealth appointments a good substitute for in-person appointments?

I got put on the OmniPod during the pandemic, so I didn't even see the doctor to show me how to use it or anything like that – it was all online. I think that that's how it's going to be moving forward anyway. If you can't attend an appointment, just do it online.

What do you think is the future of Med-Tech with regard to diabetics? Is there anything you think is missing currently?

Us people with diabetes, we need three things to be with us all the time:

I'm sure in the future there will be one device that would take care of all three, that would measure your blood sugar level, would give you insulin, or sugar, accordingly. So basically an artificial pancreas that is just outside the body – that's what I'm hoping for, because I see it happening. 10-20 years ago, no one would have ever thought that you can check your blood sugar on your phone. So I believe something like that would come out very soon and it would be helpful, for everyone. 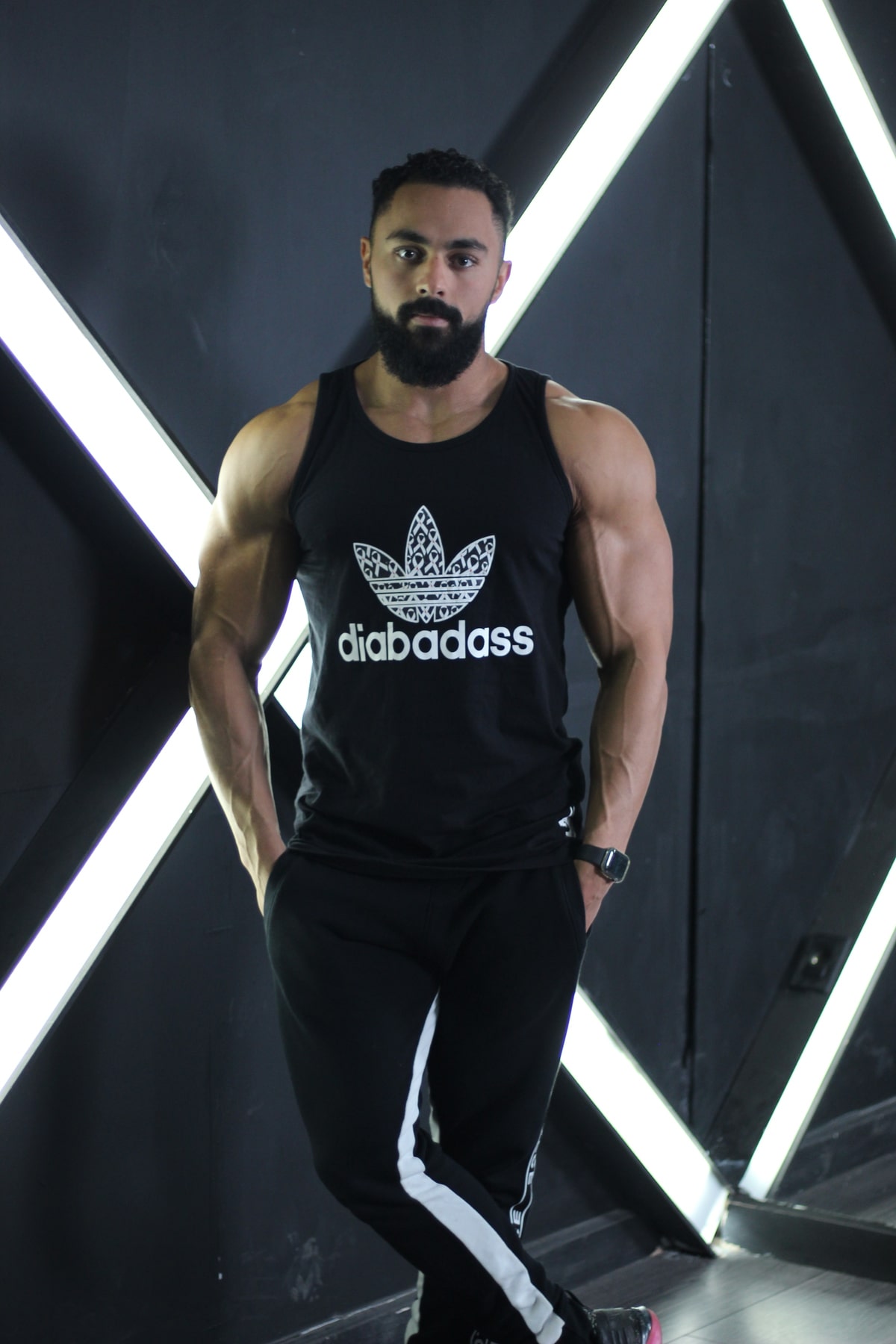